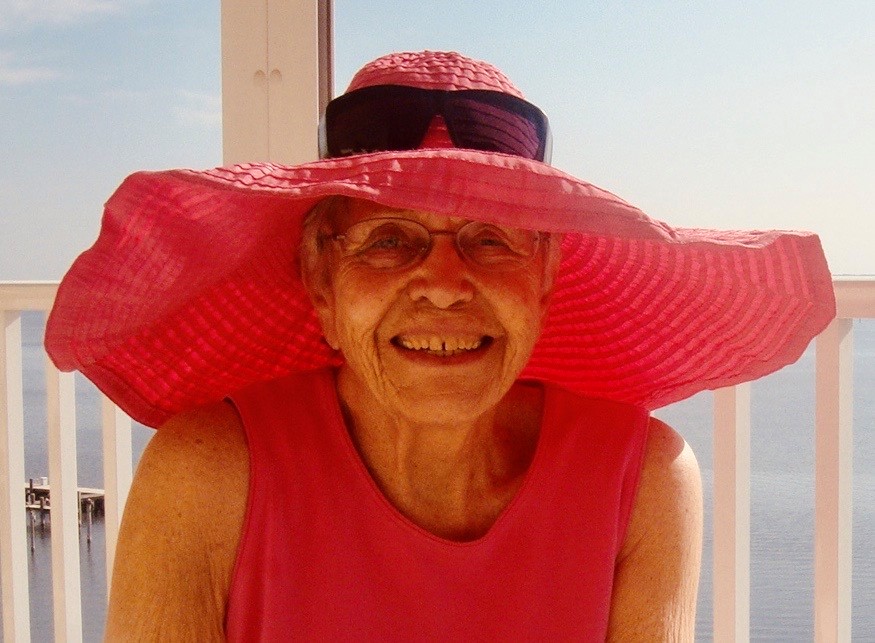 She is fondly remembered by family and friends from the eight states where she lived her life: Montana, Washington, Colorado, California, Missouri, Florida, Illinois and Indiana.

Barbara is preceded in death by her mother Alice Marjorie (Hamlow) Shepherd, and her husband of 61 years the Rev. Dr. William L. Hanawalt (Bill). He was the love of her life. After their wedding in Seattle on November 20, 1948, she gladly joined him on their first out-of-state move to help him pastor the little church held in a school in Waverly, just outside of Bill’s hometown of Fort Collins, CO.

She subsequently helped him pastor churches (and serve as church organist on her own Hammond organ) in Stoneham and Fort Lupton, CO and in Pleasant Hill, CA. She loved music and had also learned to play piano, saxophone, oboe and accordion. She sold her accordion in order to purchase a trombone for her son, William, to pursue his twelve-year musical career through college.

The family relocated to Springfield, MO in 1964 where Bill served as Campus Pastor, later Dean of Students, as well as teaching religion and history at Evangel College (now Evangel University). Barbara served as the secretary and administrative aide to the Academic Dean, the Director of Development and later to the President of the College. At Evangel’s Commencement Exercises in 1976 Barbara was given a special award for her years of distinguished and devoted service to the school.
In February of 1976, Barbara and Bill relocated to Cocoa, FL where Bill served as Correctional Chaplain at the newly opened Brevard Correctional Institution, where Barbara also served as volunteer organist for church services held in the Chapel. Bill eventually served as President of the American Correctional Chaplains Association with Barbara at his side. Until her retirement in the fall of 1991 Barbara worked as the Office Manager for dental practices in Merritt Island and Cocoa, FL. Starting in 1982 Barbara and Bill constructed (largely with their own labor and skills) their retirement home on the west shore of the Indian River in Cocoa, naming it “Hanawalt Paradise.” Over the years they hosted dozens of friends and family at their resort-style home to enjoy good cooking, great conversation, swimming, sailing any of three sailboats, viewing the flora and fauna at the Merritt island National Wildlife Refuge, and watching dozens of rocket launches at the Kennedy Space Center, just across the river from their home.

Beginning in 2011 and until her death, Barbara lived independently or in assisted living while making new friends in Titusville, FL, Evanston, IL and Fishers, IN.
She is survived by her sons, William and his wife Cheryll (Chandler) of Fishers, IN and Curtis and his wife Pam (Gardner) of New Orleans, LA., as well as her four grandsons and their wives: Curtis and Rochelle, Zak and Gabrielle, Christian and Amanda, and Kyle and Michelle, and her 6 beloved great-grandchildren (Claire, Wesley, Skye, William, Traeton and Nora). Despite her many other accomplishments and experiences, Barbara always maintained that the greatest joy, pleasure and satisfaction of her life was raising, enjoying and doting on her children, grandchildren and great-grandchildren. In return her family eagerly returned as frequently as possible to the “Hanawalt Paradise” to enjoy Barbara’s love and attention.

She remained life-long friends with members of her church high school youth group from Hollywood Temple (now Calvary Temple) in Seattle, including a close-knit club of girls (later women) called “The Swoonettes,” who last gathered together in 2010 at the “Hanawalt Paradise. In her retirement years in Florida she greatly enjoyed her many Brevard County friends, in addition to becoming the new “adopted sister” of her good friend Wanda Erwin and her sisters.

There will be a private family Memorial Service.

In lieu of flowers and in appreciation for the skilled and tender care extended to Barbara in her last days, memorial contributions may be made in her name to Franciscan Hospice House, 8414 Franciscan Lane, Indianapolis, IN 46237.