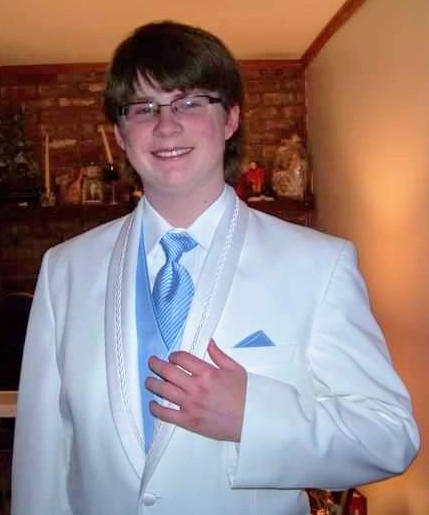 Collin was a graduate of Elwood High School Class of 2012. After high school he attended Ivy Tech for a short time, but truly enjoyed traveling around the world. He once spent 3 weeks traveling to several different countries through people to people.  The last few months Collin had been working at PayLess on Cross St as a cashier. Collin enjoyed making his coworkers and customers smile. He was such a loveable person.

When Collin was younger, he helped take care of his great-grandma, Simone Davis. Those two were inseparable. They loved traveling together and playing cards. When his great-grandma passed away, Collin played the piano at her service. It broke his heart to see her go.

We can all agree that Collin was a jokester, a goofball some might say. He was a kind a gentle soul. He would always much rather laugh than feel any other emotion. If he saw that anyone was going through a hard time, or needed cheering up, you better believe he wasn’t going to stop until that person had a smile on their face. Collin was an incredible storyteller with the sweetest soul.  He loved to play video games with his brothers Chris and Vinson. They taught him how to play several games. Collin loved to play any and all games. Anime was always a huge passion in Collins life. He loved to attend the conventions with his friends.

One of his favorite passions was playing Dungeons and Dragons. One day when he was younger he reconnected with his special friend that helped him learn about D+D. He fell in love with the game right away. When he got older, he found the game online and had a special group he played with; where he achieved being the dungeon master. He loved that role and making up stories for his new group of friends. That is where he met his girlfriend Kiki. Their characters fell in love first before they did. He loved her so much , always talking to her on the phone for hours. Some nights they would watch movies together through the internet.

When Collin got diagnosed with leukemia, he reconnected with his special friend Scott. Collin showed him how to play D+D online. Collin got the chance to play with his sisters Tiffany, and Ceci, brother Robert, and nephew William. He had so much joy playing with them that you could hear his laughter all through out the house.

He was a wonderful brother, son, grandson, and friend. He will be deeply missed by all who knew and loved him.

He is preceded in death by his grandma Darlene Sullivan; grandpa Vernon Needler; and great-grandma Simone Davis.

A visitation will be held on Friday July 3, 2020 from 11-1pm at Legacy Cremation and Funeral Service – Anderson. A graveside committal will take place following the visitation at 1pm at Maplewood Cemetery.