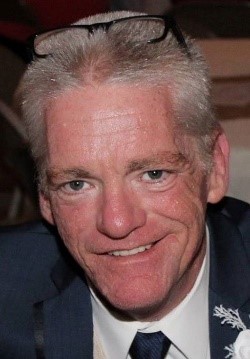 Jeffery Dale Conner, 57, of Muncie, went swiftly to his heavenly home, on the morning of Thursday, December 2, 2021.  He was a faithful servant who loved the Lord, his family, and his church.

Jeff was born on July 4, 1964, a red-headed, blue-eyed firecracker, to Dennis and Faye (Sewell) Conner.  He gave his life to Christ on January 3rd, 1971  and was baptized one week later.  He served God and his church faithfully, humbly, and passionately.  Jeff was known for his beautiful bass singing voice.  He led the Old Town Hill Church choir, performed special music with his mother, daughter, sister, niece, and cousins, and was even joined on stage by his granddaughter.  He sang with a southern gospel quartet “IV Grace” for nearly 20 years, up until the day he joined the heavenly choir.

Jeff’s heart for service knew no end.  Those who served alongside him knew there was no ladder he wouldn’t climb, no repair he wouldn’t do, no skit he wouldn’t participate in, no costume he wasn’t willing to wear.  From dunk tanks, to pink beards, to VBS dances–Jeff was all in.

Jeff will be greatly missed by those who worked with him, those who attended church with him, and especially by his family.  He was a wonderful son, brother, uncle, husband, father, and grandfather.  When it came to his grandchildren, there is no other way to describe PawPaw but “perfect.”  He was there for them, cared for them, prayed for them, listened to them, told them stories, and made them belly-laugh.  His smile and his laugh were infectious and will never be forgotten.