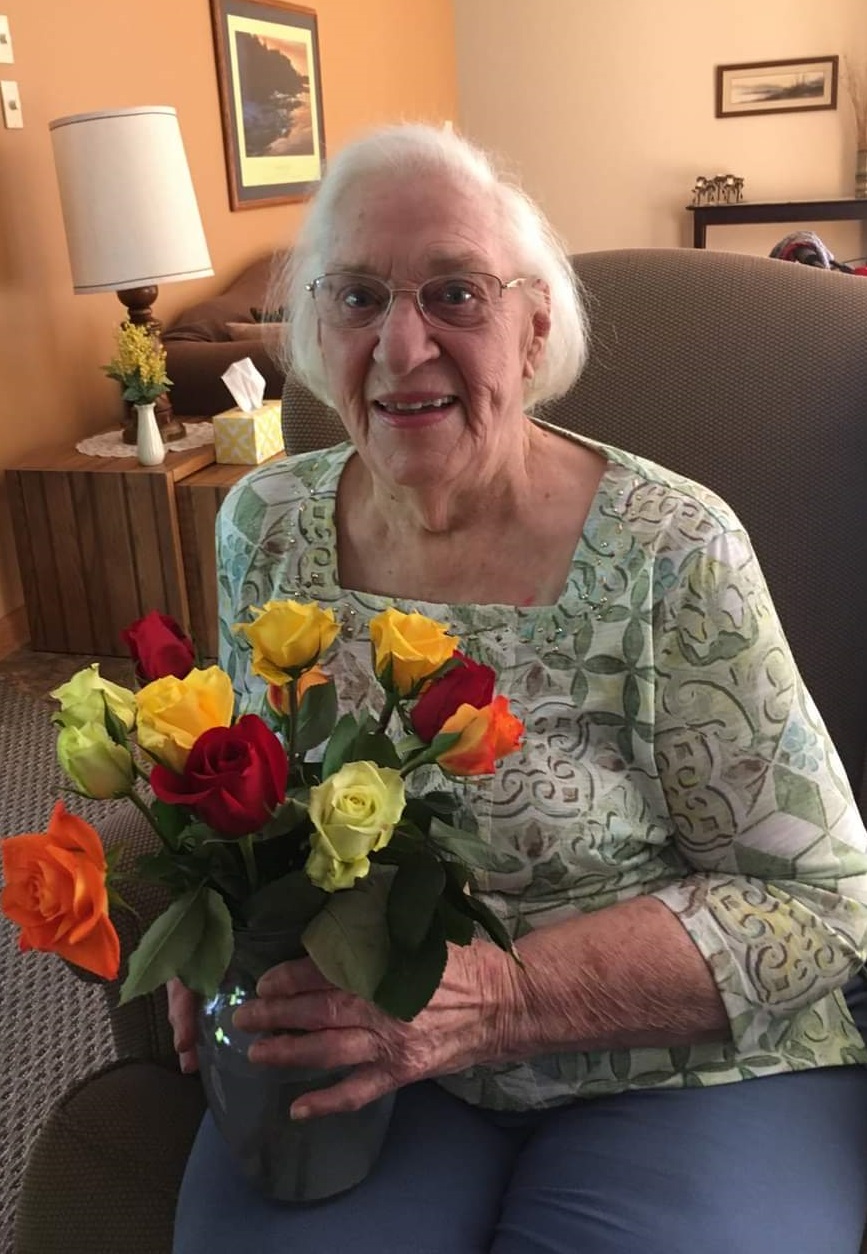 Lois Kuehn Boswell, 90, died November 6, 2021 in Speedway, Indiana, where she made her home with her daughter, Carol Washburn. She was laid to rest next to her husband at Mount Pleasant Cemetery in Johnson County on a brilliant fall day.  Due to COVID the service was private.

She was born July 27, 1931 in Brownstown, Indiana, to Martin and Stella (nee Redicker) Kuehn. She graduated from Cortland High School, Cortland, Indiana, where she met her future husband, Kenneth Boswell.  Lois and Ken were married August 29, 1953 while Ken was on leave from the Air Force during the Korean War. They were married for nearly 46 years; Ken died on June 25, 1999.

Lois and her twin brother, Lowell, were one of three sets of twins, plus two singletons, born to their parents. The phenomenon garnered some attention: when all three sets of twins were enrolled in the same school at the same time, the Brownstown Banner published their photo on the front page of the newspaper. (The story and photo were reportedly picked up by other newspapers, but that has not been confirmed.)

The Kuehns were a hardworking German-Lutheran family buying a farm in the midst of the Great Depression. All of the kids had to help on the farm, and Lois recalled that their “pay” for long hours of picking tomatoes or green beans might be a candy bar. One summer’s worth of work earned them a bicycle!  Money was tight with eight children, but there was love in abundance.

An early trauma in Lois’s life was when the family home was destroyed by fire in the summer of 1937, along with most of the family’s possessions, including the brand-new doll, her first, that Lois had just been given for her sixth birthday.  Men working at a neighboring farm saw the fire and rushed to help put it out, saving the barn and farm equipment. The house was a total loss, but the neighbors were able to carry Stella’s china cabinet out of the house, at the cost of a single teacup. The china cabinet held pride-of-place in Lois’s home for many years.

Lois was good in school and loved math. She enjoyed working at a local bank before her marriage, and, later, managing the family finances. She loved puzzles of all kinds, including crossword puzzles and Sudoku, and was working on a devilishly hard 1000-piece puzzle just a couple of weeks before her death.

She had a creative side as well.  For many years she made craft items to donate to the annual church bazaar. She made bright beautiful quilts for each of her grandchildren. She crocheted doilies and dresser scarves, and embroidered pillow tops and cases. She needlepointed a beautiful cushion cover for her hope chest.

She was a skilled seamstress, making clothes for her daughters and herself, and even made a dinner jacket and bowtie for five-year-old Stu to wear to Big Sis Ginny’s wedding, where he acted as ringbearer (a task he performed flawlessly, by the way).

Lois was a “doer,” keeping a spotless home, painting inside and out, decorating, gardening and landscaping.

She did not think she was a very good cook, but her feather-light devil’s food cake with caramel icing was Ken’s favorite, and he and Stu requested it for every birthday. She made jewel-like apple pies, and her fried chicken and potato salad were (almost) as good as her mother-in-law’s.  She made a variety of Christmas cookies every year, including decorated cut out Santa’s and Christmas trees, and enlisted the help of her grandkids when they were old enough. The tin of cookies given to every family at Christmas was a most treasured gift.

Never idle, Lois was a devoted member of Calvary Lutheran Church for 45 years. She was a member of Willing Workers, did member outreach for 27 years, helped embroider Communion kneeler cushions, and made dozens of quilts for Lutheran World Relief.

She was a loving daughter, sister, wife, mother and grandmother, who gave her very best effort to everything she did. She had a servant’s heart, but the truly remarkable thing about this humble woman is that she didn’t think that her efforts were noteworthy. They were just what one did.

If desired, memorial contributions may be made to Calvary Lutheran Church (@CalvaryLutheranChurchandSchool Indianapolis), or the donor’s choice of charities.