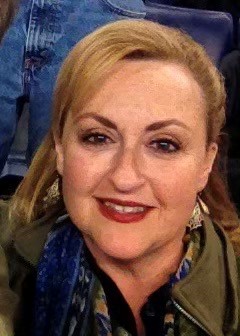 Born in: Bremen, IN
Resided in: Indianapolis, IN

Lori Patrice (Nierste) Slaughter, 64, passed away Tuesday, March 16. Lori loved to spend time with her loving husband and childhood sweetheart, David R. Slaughter, so much so, that after a long health battle of her own, she joined him in Heaven due to complications from her fourth stroke, only four short days after he died. They couldn’t stand to be apart from each other in this life or the next. We know they are together in Heaven. Although it is shocking to lose both of them in such a short time it is not surprising to those that knew them. We know this is what they would have wanted. It gives their family and friends great comfort and peace to know that they will be together forever.

Lori was born in Bremen, Indiana, January 10, 1957 to the late Frederick “Fritz” and Carolyn (Haenes) Nierste. Lori graduated from Bremen High School in 1975. She then attended Western Michigan where she double majored in Dance and Fashion Design & Textiles. She married David R. Slaughter on June 10, 1978. They immediately moved to Indianapolis after a brief newlywed summer living at Lake of the Woods in Bremen, Indiana. A summer they spoke of often in fond memories, as they transitioned to the rest of their lives spent together in Indianapolis. Lori’s family were lifelong and many generation community members of Bremen, Indiana. With her grandfather (Noble Haenes) and his father having built many of the homes and buildings stone by stone with his own strong hands. Her father, Fritz, was a local legendary coach and teacher who literally had everyone from town in school or sports. The Bremen High School track was named and still remains named after him to honor his memory and contributions to the community. Her mother, Carolyn lived in the same one block radius her entire 85 years of life and knew everything and everyone in Bremen and everyone knew her and everything about her. Lori used to joke of her cherished Bremen upbringing, that she just needed one more summer there to be sure it was time to go onto life in Indianapolis. Although she was destined for the big city, she had deep roots there.

Lori was a lifelong homemaker, who wore many hats in her tenure. She was never afraid to roll up her sleeves and get to work supporting her beloved husband or children in their dreams and work. She taught aerobics in the church basement, worked retail and decorated department stores seasonally. She loved staying home and raising their children and supporting all of her family and friends. Lori was a member of many community groups throughout her life, including, the Junior Miss and Miss Alumni scholarship program groups, helping with Bremen High School Scholarships, her children’s Booster clubs for their activities and sports growing up, endless fundraising for their teams, school carnivals, team mom, room mom, The Children’s Bureau and countless other committees for her kids.

Lori also loved to spend time with her children and their spouses, her precious and pampered granddaughters and countless treasured friends and family, of which were the very center of her life. She enjoyed cooking, crafting and drawing, chatting, listening, entertaining, laughing, mystery shows and ghost stories. She never suffered fools. Her home was the hearth and was constantly filled with many whom she loved and loved her. Many of her children’s friends also looked to her for motherly guidance. She loved to pamper her granddaughters and have girl time shopping and drawing. She made her granddaughters homemade, hand-drawn paper dolls of their likeness and clothes. Her big brown eyes, lipstick collection that framed her bright smile, quick wit and cheeky tongue, open door policy, unconditional love and loyalty will be forever missed. In addition to her strong, natural motherly care. She was a Believer.

She was proceeded in death by her husband of 42 years only four days before her, after a long battle with cancer. Lori suffered from a rare, progressive vascular disorder of the brain called Moyamoya that causes strokes and with which she was diagnosed just days before her passing. Lori was very tough which is evidenced by the fact that she survived three strokes before she passed away due to complications from her fourth stroke. Dave, who was also her childhood sweetheart, and Lori spent the past several years battling their own respective health problems but supported and loved each other unconditionally until the very end. They spent their lives together. They died together. They are in heaven together. They spent the last year of their lives quarantining just as they would have chosen – together. Even though the last several months were difficult they were able to spend that time together, along with their children Emmy and Clay, who supported and cared for them in their time of need.

Lori was also proceeded in death by her parents (mentioned above), grandparents, and her sister in law Sara (Eric) Schneider.

The family would like to extend their greatest appreciation to the Community Hospital North and East, Care Teams, Surgeons and Trauma units, as well as the Critical Care unit doctors, nurses and entire staff at Community East and the hospital Palliative care team at Community East. Additionally, thank you to the legion of family, friends and even strangers who prayed, loved and helped during this time.

A memorial gathering will be from 9am to 11am on Thursday, June 10, 2021 at St. Lawrence Catholic Church, 4790 N. Shadeland Avenue, with a service to start at 11am. Inurnment to follow at Crown Hill Cemetery, Indianapolis, Indiana.

In lieu of flowers, memorial contributions may be made to:
In Memory of Lori
The Dyslexia Institute of Indiana at https://www.diin.org/donate Please put “In Memory of Lori Slaughter” in the subject line
In Memory of Dave
The Dave Slaughter Memorial Cross Country Alumni Endowed Scholarship at Hillsdale College https://secured.hillsdale.edu/hillsdale/support-hillsdale-college