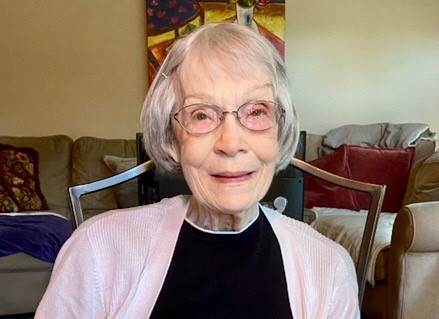 Born in: Muncie, IN
Resided in: Indianapolis, IN

Rita Jane (Hennigan) (Lucas) Gatzemeyer, 87, of Indianapolis, Indiana, passed away on July 23, 2021.
She was born to parents Lena Hennigan and Francis Hennigan, June 14,1934 in Muncie, Indiana.

Rita attended St. Lawrence Catholic School grades 1-8 and graduated from Muncie Central High School in 1952. She enjoyed school, especially when cheering on the Bearcats at Hinkle Fieldhouse with her pep-block friends.

Rita met (Late) Richard Lee Lucas in 1953. They were married in 1954 in Muncie, Indiana. Together they raised 5 children: Gini, Rick, Chris, Diane, & Audra. Dick was an officer in the Air Force and the family traveled around a lot during their lives. They started out in Indiana, and moved to Texas, Montana, Minnesota, Colorado, Hawaii, Virginia where Dick retired, and finally back to Indiana to farm with relatives. All 5 of the children were born in different states and share their parents love of travel.

In 1979, after the sudden death of her first husband Dick, Rita went to work as a teacher’s aide at Oaklawn Elementary School in Monticello. From there, she went on to work as a school secretary for 20 years at Roosevelt Middle School. She retired from Roosevelt Middle School in 1999 having met some of her dearest friends and making sure the books were balanced to the penny!

In 1992 Rita met Marvin Gatzemeyer. They forged a strong connection and were married in 1993. They enjoyed traveling, spending time with their children’s families and made several moves themselves, from Indiana to Illinois, Missouri and back to Indiana. While in Missouri they enjoyed some lovely friendships, involvement with their church and Rita belonged to the “Tuesday Study Club.” Not everyone is lucky enough to find love again and she felt very fortunate to have met and loved Marv along with his beautiful family.

Rita was a devoted Catholic and found great strength in her faith. She enjoyed spending time with her friends and family, college basketball, travel, watching golf, crossword puzzles, adult coloring books and of course, sweets! She was a source of strength, kindness and friendship for her children, family and friends and will be dearly missed.

Services will be as follows:
Thursday, August 19th
Our Lady of the Lakes Catholic Church, Monticello, Indiana
Rosary at 10:30a.m. with visitation 11:00a.m.-12:00p.m.
Funeral Mass to follow at 12:00p.m.
Family will have a private burial in Delphi

In lieu of flowers, memorial contributions may be made to:
http://www.westcancerfoundation.org/
or
Dystonia Medical Research Foundation
1 East Wacker Drive, Suite 1730
Chicago, IL 60601