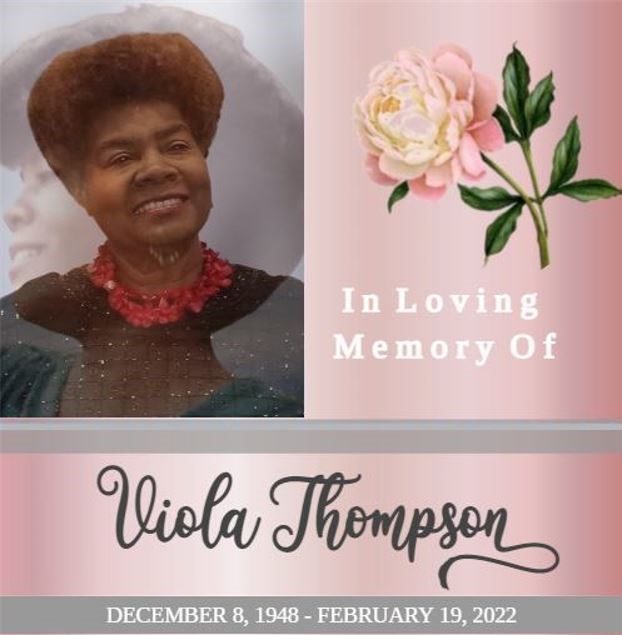 In Memory of Viola Thompson

Viola (Vilar) Thompson, of Indianapolis, Indiana passed away in death at 73 years of age, on February 19, 2022.

Viola, the daughter of Carrie Thornton, was born in Florence, Alabama on December 8, 1948.  Along with her siblings, she was raised and cared for by her mother and Ottaway Scott.  She was the youngest girl and number 8 of 10 children.  She loved her family and often spoke fondly of babysitting her nieces and nephews.

Viola graduated from West End High School in 1967. As a youth, she was very athletic and enjoyed playing sports, cheerleading, and excelled academically.  She was also very creative and would write poetry and music.  She was industrious, and hard-working when doing agricultural work common in the south at that time.

Viola was united in marriage to her husband, Felix Thompson on June 7, 1967.  They later moved to Indianapolis, Indiana to begin their life together.  They were married for 48 years until his passing.

Viola began studying the Bible with Jehovah’s Witnesses and was baptized on June 8, 1974.  In the beginning, she attended the Washington Park Congregation and afterward the Arlington Heights and East Lawrence Congregations.  At the time of her death, she was faithfully serving in the Devon Hills Congregation.  Later in life, she worked part-time for CICOA and other jobs centered around helping people. However, her primary career centered around her volunteering full-time to help people understand the Bible and have a closer relationship with her God, Jehovah.  She participated in this volunteer work for over 45 years!

Viola was a kind, positive, good at organizing fun activities type of person, with a beautiful smile.  She and her husband were extremely generous, hospitable, and willing to lend a hand in helping ones in need. She loved to collect antiques and grow vegetables in her backyard garden.

Viola really enjoyed Friday nights with her children, grandson, and occasionally others who gathered at her home for a delicious home-cooked meal, which often included her tasty greens and cornbread. The night was filled with good conversation, joy, games, and much laughter.